An Atreus blank has become part of my collection recently. I take the occasion of change and want to transition to a Workman muscle memory along with the new keyboard.

The problem is starting from from a blank keyboard, I want to optimize my layout according to the finger strain coefficient rather than mnemonics (although for an atreus, the strain map looks slightly different).

That + Workman keyboard layout involves remapping a whole lot of things. Now, I’ve found a setup that starts to work for me and heavily relies on the right hand home row + factor-2-strain-keys for most of the things combined with neatly ergonomic modifier chording on the left hand home row due to qukeys.

However, now there are a ton of left-over keys spread around which still have their original bindings. I have tried unmap on default key bindings but that doesn’t seem to work.

I’m starting to think: is a custom build really my best option here? Since configuring seems quite convoluted without a clear abstract command identifier instead of their key proxy (hypothetical InsertLineStart instead of actual I)

Here is the corresponding suggestion in the complaint section:

Probably every (modal) editor out there uses a mental model of mnemonic key symbol shortcuts for the editing language. Kakoune is no exception. They are all wrong. Rather the editing language should be conceived as muscle memory primitives that interact on a command bus. Problem is, we have no identifiers for muscle memory, and looking at the source code of kakoune, we don’t even have them as part of the public api for the commands. To fix this, we need an alternative mental model of configur…

You can’t get rid of legacy keybindings, but you could override them with do-nothing mappings:

It’s not possible to use keycodes here because Kakoune runs inside the terminal and terminals do not provide keycodes information.

Thank you for this trick. It is an ok-ish work arround. However, I suspect it doesn’t get them keys rid in tooltips, like in view mode or goto mode. I’ll have to check … 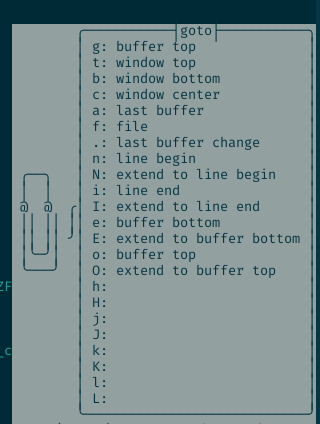 this is what I ended up with. I wished this can be acknowledged as an UX bug.

You could make your own user mode mygoto with the defaults you like copied over and activate that on g instead of the default goto.