I’ve added kakhist to mru-files.kak. It’s a separate module, so those who have their own MRU’s can use kakhist independently (it does, however, require the sh library module in the same repo). There’s also a vim q: replacement which you can map to g: (command history buffer).

kakhist saves & restores command (:) history to/from a single kakhist.txt file. It works with multiple, overlapping sessions without clobbering unrelated histories — it figures out which commands have been loaded and which are new for the session (only new ones are appended to kakhist.txt when the client exits).

Note: if you have have a single kak server for all kak's (single session), you may wish to stick with @Screwtapello’s kakoune-state-save (state-save-reg-save colon). kakhist hands the command history over to the sh, so it can do (by default when kak starts / exits) command filtering and avoid multiple-session clobbering.

You can define arbitrary sh code to filter out commands that shouldn’t be saved (option mru_files_ignore_sh). The default code filters out quit-related commands and sets up $2 to contain the base command name, stripped of args and ! ($1 always contains the full command). You can replace it completely, or append to it. To add exclude patterns (e.g. don’t save pwd):

Such code can be further appended to. kakhist-save only checks the return code of the last command.

kakhist-buf-show shows a list of previous commands, like vim’s q:. Press <ret> on any line to execute. I personally map it to “g:”:

kakhist-{load,save} add a special marker (: kakhist-save, which should never enter history normally as it begins with a space) to the colon register. kakhist-save appends everything after the last marker to kakhist.txt. This way, different sessions never step on each others’ toes.

To save, the shell script does

… which loads all list elements into sh “$@” positionals. I believe this is the safest approach in general to loading an “array” into shell, e.g.

If you think this might be useful, please test & enjoy. Comments, suggestions, GitLab issues etc all welcome.

kakhist-{load,save} add a special marker (: kakhist-save, which should never enter history normally as it begins with a space) to the colon register.

I hadn’t thought of sticking a marker into the history, however. That should make computing the common suffix quite reliable, although it would also make saving/loading history registers more complex,

Looking at your code, have you considered putting the history-buffer mappings in a comment at the top of the buffer, rather than in a :info box?

Also, it looks like your code would have difficulty with commands containing newlines, or a command history longer than can fit in an environment variable, but those things are pretty rare so it’s a reasonable engineering tradeoff to ignore them.

Thanks. I’ve fixed the newline issue by surrounding the escaped string in sh, not sed (__apos_quote()). I would have used sed -z from the beginning, but who knows if it’s available. I should probably write something along the lines of your kakquote's, but for sh. For context,

adds an “ugly” command to history, then you can actually execute it with <up>. In kak it shows up as having a tiny LF unicode char, but on a single line.

Regarding env var limitations, that could probably be fixed via echo -to-file -quoting shell %reg{colon} with a mktemp file. Though I’ve used env vars in too many places already, I’ll have to check.

Regarding UI, thanks, that’s a good idea. Maybe comments at the end of the buffer, since the user should probably start there, like vim's q:. Probably still keep the infobox around (or do you think it’s annoying?)

Hi almr, enjoyed going through your project really good job. I have given it a play and here is some feedback first impressions:

First impression, nicely written code base and project layout. I’m looking forward to playing with it more. Thanks almr. Bye

@duncan, thanks for reviewing and for your comments.

When the kernel creates a new process, it reserves space in the memory map for the “aux area”, which contains information like the effective user and group IDs (see getauxval(3) as well as the command line and environment. The size of this area is platform-dependent, but if you have GNU xargs installed it will tell you:

On my Linux system, the maximum space available to command-line arguments and environment variables is 2,092,876 bytes, but on some systems could be as little as 4,096 bytes.

In particular, I believe macOS has a notably smaller aux area than Linux.

Yeah, I’ve seen something like that on stackoverflow. Can someone with macOS run echo | xargs --show-limits?

This limit probably doesn’t apply to sh variables (x=... or set -- ...). If so — then ideally, kak should be configurable to pass $kak_* and $n to shell scripts via a specially crafted prologue (e.g. save the values in a script in mktemp, and source the script in an invisible %sh{} prologue). Otherwise, every user script has to apply this workaround separately, which seems like an awful amount of duplication.

Kakoune doesn’t currently do that, but mawww has recently been working on the command-fifo branch as a way for scripts to obtain data from Kakoune without the limits of the auxiliary area.

Suppose I tried to implement a parallel mechanism to pass options / registers to %sh in a temporary file in /run. I would need to generate a unique filename from within kakscript, without resorting to a separate %sh call (e.g. to call date).

How can I generate a unique ID, from within kakscript, that will not conflict among concurrent sessions / hooks / user-triggered commands? I’ve looked at %val{client}, session, history_id, timestamp (useless) but I’m still not sure combining these would yield a unique ID, if hooks can run concurrently.

Really like this plugin. I was at first sceptical to try mru-files but omg loved so much I implemented my own! Well maybe not my own fd. Thanks for the great job and inspiring me on kowsky.kak. Going have a deeper play with kakhist on the weekend with some predetermined commands for the text file. I’ll check out your repos updates.

ignorefile — this is easily implemented […] I’ve already added an example on how to add a regex ignore.

Yes, you are right I can do that myself. Sometimes I just need to hear it from someone else

Did not know this. A familiar occurrence. Last minute thought (always a worry

) have a look at this. A roll your own approach to cd history:

It’s not a request or feature just thought you might like it for an idea. I owed you one at least. Bye

Thanks almr, gave kakhist.kak a run and am hooked. Bye 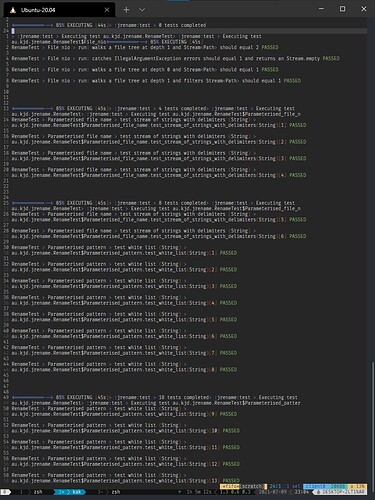 I’m sorry, but I most be confused as to the configuration you’ve provided in the README, because I’m getting this error in *debug*:

Here’s what I have:

Your snippet works in my setup, if I pre-declare files mode; note that Andy has recently reworked demand, it had some bugs before.

In the readme, though, precisely because multi-module plug.kak usage can get confusing / fragile, I suggested putting the kakhist commands after plug, in a separate top-level block. So a single demand and a single config arg to the plug command.