There are some very informative discussions about keyboards and ergonomics in the Vim community, so I was curious about the opinions of the Kakoune fanbase. What is your keyboard of choice, and why? I’m considering an Ergodox myself, but hesitating because some complain that the thumb clusters are difficult to reach.

My keyboard of choice is Kinesis Advantage 2. Some people complain about its thumb cluster reachability (http://xahlee.info/kbd/keyboard_Kinesis.html). However, for average-sized hands (mine are neither small nor big), the most used thumb keys are easily reachable.

I decided to buy this keyboard as it was the only one I was reading positive reviews over a decade, not because of any particular feature. After using it for more than 2 years I appreciate its shape and keys positioning, it’s extremely comfortable. Switches are good (Cherry MX Brown) too but they are not unique to this keyboard, of course.

It supports macros and custom layouts on keyboard level but I don’t use those features much because sometimes I have to work on other keyboards so I mostly rely on software for remapping.

Thanks for the feedback! The Kinesis Advantage was definitely another model on my radar, as was the Freestyle Pro. I do want to avoid getting too ridiculously far away from muggle keyboard layouts, just so I’m not completely flummoxed when I have to type on another board.

I use an Ergodox EZ. You can check out my configuration here. You’ll see I recently started playing around with implementing some of the kakoune like movemet/selection at the keyboard level using layers. It works fairly well, but I havent quite figured out how to do things like the I and c commands that combine a movement and modeswitch or deletion or all three. It’s also a little wierd as I can’t really map the escape key in my native layer to get “back to normal mode”… In any case you might find some concepts from it interesting.

To more directly answer your question, I wouldn’t still be using kakoune if it weren’t for the ergodox, just based on the extra strain of chording alt with everything. To counter it, in my home layer I use the dual-function capability to make z and / ctrl when held, and x and . alt when held. Moving the fingers ortholinearly down one row and holding is FAR less strenuous, especially since its so symmetric and can be used from the opposite hand to the key you’re modifying (<a-i> becomes hold-x with left hand, i with right, etc).

I find the ergodox hugely helpful in other ways, such as making numpad appear centered on my right hand home row when a layer is toggled to get numbers, or making the number row only send the special characters (without shift key) so reduce usage of shift in programming. But probably the biggest thing is the ortholinear arrangement (rows directly aligned rather than offset), which makes transitioning to different rows feel so much more natural. It feels like unneccessary contortionism to use a regular keyboard now.

About the thumb clusters, yeah there’s honestly too many keys there for your otherwise very clumsy thumbs. They’re pretty much laying sideways against the cluser and you’ll find its much more difficult to figure out which one you’re on by feel with the side of the finger rather than the much more sensitive fingertips. The furtheest keys are definitely a stretch. I just dont map anything important to them and instead use them for rarely used keys like print screen, or for modifier key combos (ctrl-p for my editor, and such). Its really not that big a deal from an ergo perspective, but from a “its kind of a waste” perspective it can bug you. You might want to look into Redox or one of the other offshoots that put fewer keys in the cluster. The catch being you’ll have to find a DIY kit to get one of the others (or someone who will build it for you). Take a look at this visual interactive comparison of the ergo family split keebs: https://jhelvy.shinyapps.io/splitkbcompare/

I use Niz Atom 66 45gf. It’s compact, programmable and uses electro-capactive switches. As for ergonomics side I would say it is pretty thumb friendly because of its reduced space bar. I have no problem reaching up to 3rd key next to space bar both with my left and right thumb fingers.

You may have just given me the boost of confidence I needed to go ahead and pull the trigger on an Ergodox EZ. Dual function keys sound pretty awesome, and as long as the thumb clusters aren’t a huge problem from an ergonomic perspective, it sounds like I should be fine with the board. Thanks a lot for sharing your config as well.

I use a WASD VP3 keyboard. I tend to prefer keyboard that follow the usual key layout as I fear not being able to use regular keyboards if I get too used to a fancy layout one.

Good point, I did not read the topic carefully enough

I have been tempted to try a split keyboard like the kinesis freestyle, as it seems that would not deviate too much from the regular keyboard layout (except for hand spacing), but never got to try that.

FYI, I didn’t get an ortholinear keyboard for a long time because I was worried that I wouldn’t be able to type on a normal one – and that was true for the first few months. Now I can switch without a problem, even though the keys are mapped differently. Escape is at my right thumb with my ErgoDox, and it’s on the menu bar thingy on my macbook. Z and / double as my control keys on my ErgoDox and I use the normal control keys on my laptop.

But it’s just not a problem, strangely enough.

EDIT: Related: I can no longer use Vim for even the most basic things, since a week after I started using Kakoune. Why is this different? No idea.

Update on my own keyboard hunt: after doing some research, I became totally hooked on the idea of trying something with concave keywells, so I ordered a Kinesis Advantage 2 with the hope that it will tide me over until I can take the time to build a Dactyl, which I’d also really love to try. Apparently you can flash QMK firmware on the Advantage, which means I can even get things like dual-function keys on it if I’m so inclined.

EDIT: Looks like you need to physically replace the microcontroller on the Advantage before you can flash QMK firmware, just to be clear.

Just noticed, you are a fellow Niz user! I use 35gf with the higher accutation point (even lighter). I have never found a keyboard I enjoy nearly as much as the Niz. I currently have 3 of them (about to order a 4th). 2x Niz 84-EC(S) and 1x Niz 84-EC Pro.

Really enjoying the Kinesis Advantage 2 so far. I’m coming to suspect that a lot of the RSI issues I was having were largley due to hyper-extension of my fingers and wrists, so it seems like major boon that all the keys in the curved keywells more or less fall along the natural curved trajectory that my fingertips traverse as they pivot around my joints.

Last weekend, I built a Corne. It’s working nicely, but I’m still getting used to it.

Nice, split ergo gang! I built an Iris a few months back and the biggest game changer for ergonomics for me was having access to Ctrl/Shift/Alt from the thumbs. I wasn’t sure I would be OK without a num row, but I think I will try going without for my next one, along with a low profile case and Kailh Choc switches. 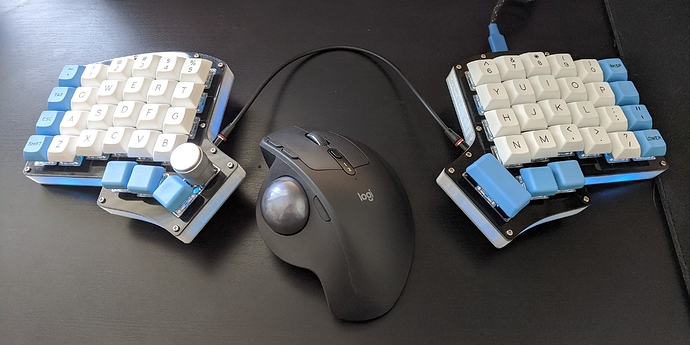 One downside is I keep tweaking my keymap every few weeks and then I have to spend a couple of days getting used to the changes.

Nice! Those thumb keys look like my partner’s G20s. What does the rotary encoder do?

was thinking to get this kb myself. How’s the experience so far?

Yes, those are G20s! I saw it on someone’s post on Reddit and they are much more comfortable on the sides of the thumbs than the DSA keycaps.

Rotary encoder is set for mouse wheel scroll by default, which has the advantage of smoothly scrolling and being usable everywhere (Kakoune, tmux etc.) as opposed to arrow keys or PgUp/Down. (Granted, after I got the trackball the mouse is easier to reach than before, so this is less useful.) The downside is that the mouse cursor has to be on the window to scroll. It’s used for volume control, horizontal scroll and tmux window switching on other layers, but those only get occasional use.